YOU ARE AT: Home » Relationships » 4 Reasons Why You Boyfriend Is Bad In Bed (+ 7 Tips For Better Sex)

Get expert help dealing with problems in the bedroom. Click here to chat online to someone right now.

If you’ve landed on this page, your boyfriend probably isn’t all that great in bed.

Now, he probably isn’t terrible. Because if he was, it would likely be down to a lack of chemistry between you, and you wouldn’t want him in your bed at all. You’d get the ick.

So there’s definitely some chemistry between you – everything else in your relationship seems to be going well, and you know there’s potential there.

But he’s not rocking your world between the sheets. And you’re wondering if there’s anything you can do about it.

The good news is that there definitely is.

Sex is never a fixed thing. It’s different every single time you do it. Our likes and dislikes evolve and fluctuate, from day to day and from year to year.

The more sex you have with someone, the better you get to know their preferences and what doesn’t do it for them.

The more comfortable you become in your relationship and the better you understand what goes on in their mind, the more deeply you’ll connect on a sexual level.

But you don’t just have to sit back and hope the situation will sort itself out in time. There are plenty of things you can do to help your boyfriend be a better lover for you and make sure that both of you are fulfilled by your sex life.

4 Reasons Why Your Boyfriend Is Bad In Bed

First of all, let’s have a look at a few reasons why your boyfriend might not currently be a good lover.

The main reason he might not be that great in bed is because he lacks sexual experience in general.

After all, none of us know what we’re doing when we first start having sex. It’s all about trial and error.

That might be the case even if it seems like he’s had lots of different sexual partners. Because he might not have had all that much actual sex if he’s never had long-term relationships that meant he was having sex with the same person regularly.

Practice really does make perfect when it comes to sex.

Long-term relationships involving consistent sex with one person whom we feel comfortable with can teach us a lot about respecting another person’s wants and needs and help us put our finger on exactly what turns us on.

So, a lack of experience can mean he’s not even sure what he likes, let alone able to figure out what you like.

2. He’s not adapting to your preferences.

Some men struggle to understand that every woman is different. Especially if they’ve only had a few partners, or just one partner with whom they had a long-term relationship. They might just assume that your body works in the same way.

This is when him having had a long-term relationship can be a negative. Maybe an ex of his really liked something that just doesn’t do it for you.

That’s not something you should hold against him, necessarily. Especially to begin with, as he’s probably trying really hard to please you. He’s just not quite pushing your buttons.

He doesn’t yet realize that he has to adapt to the things you like because sex isn’t one-size-fits-all.

3. He doesn’t care if he pleases you or not.

Okay, so this reason is a slightly more concerning one in terms of your relationship.

The issue could be that he just doesn’t really care about your pleasure. Or that he prioritizes his own pleasure above yours.

Now, that doesn’t mean he’s necessarily the devil itself. Sadly, in western society, a man’s pleasure during sex is still sometimes seen as an essential, and a woman’s as an optional bonus.

So, he’s a product of his environment, yes. But that doesn’t mean it’s not his responsibility to be aware of that and work on it.

It’s his responsibility to give you, his sexual partner, the respect you deserve, taking your pleasure just as seriously as you take his.

Maybe your main problem isn’t the way he makes love; it’s just that he doesn’t last long enough for you to really be able to enjoy it.

Maybe it takes you a long time to orgasm and he can’t last long enough to get you to that point.

7 Tips To Help You Have Better Sex With Your Boyfriend

Hopefully you’ve managed to put your finger on what the problem is. Now it’s time to think about what you can do to change things so that you both enjoy sex.

1. Put your embarrassment to one side.

The first thing you need to do is get over any embarrassment you may have surrounding sex and your sexual desires.

Maybe talking about sex comes naturally to you, and that’s great. It’ll make it far easier to have open conversations about what you need from your partner.

But if discussing your wants and needs with a sexual partner makes you blush, you need to make a conscious effort to put that to one side.

If you can’t overcome your embarrassment and communicate with your boyfriend about sex openly and honestly then things between you are never going to improve sexually.

A big mistake a lot of women make is faking sexual pleasure with a partner even when they’re not actually feeling it.

Now, you might be tempted to fake it if you’re with someone and you know it’s going to be a one-time thing.

But if you think a relationship could evolve between you or you’re having sex with a boyfriend, then faking pleasure is the best way to shoot yourself in the foot.

Because if you fake it, then he’ll logically assume that you liked whatever he was doing. So then he’s almost definitely going to try it again, and again.

And that’ll leave you in a tricky situation, as having to explain to your boyfriend that you’ve only been faking sexual pleasure all along is going to be a very uncomfortable situation.

So, make sure you’re being authentic and only showing signs of pleasure that you’re actually feeling, for both your sakes. 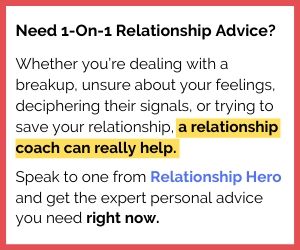 3. Think about other relationship issues.

Sex is complicated. I’m sure you don’t need me to tell you that.

It’s tangled up with our emotions in a strange, inexplicable and inevitable way.

If there are problems in your sex life, it might not really be your boyfriend’s skills as a lover that are the problem.

Think about whether other issues in your relationship, like a lack of trust or a fear of commitment or being vulnerable with each other might be coming between you in the bedroom.

Addressing those underlying issues will inevitably help with the emotional side of sex, which will mean more enjoyment of it all round.

Okay, remember how we agreed to leave any embarrassment at the bedroom door?

If you want your boyfriend to be a better lover, then you’re going to need to tell him and show him exactly what that means.

Tell him what you want. Guide his hands. Touch yourself so he can see exactly what works for you.

Make it sexy! If you’re into that kind of thing (and you both consent, of course), agree that you’re in charge and tell him in detail exactly what you’d like him to do.

Don’t expect him to magically know what you want by telepathy. It doesn’t work like that. Like most things, we get better at something when we have clear instructions how to do it!

5. Get to know each other’s bodies.

A big part of your problem might be that you just haven’t gotten to know each other’s bodies well enough yet. It’s time to explore.

A great way of doing this is having a sexy night in. Light some candles and get the massage oils out.

Take it in turn to massage each other and cover every inch of each other’s bodies.

Find out the funny places where he’s ticklish or where delicate kisses turn him on and get him to map out your body in the same way.

It’ll help you both figure out exactly what buttons you need to push to turn the other one on.

If you want him to be an attentive lover who wants to drive you wild with pleasure, you need to be that for him too.

Take mental notes of the things he loves or that drive him wild and make sure you do them for him (as long as they don’t make you feel uncomfortable, of course).

Sex is only great when it’s immensely pleasurable for both people involved, so by doing your bit to give him the pleasure he likes, he’ll be more inclined to put the extra effort in to giving you the please you like.

Last but not least, the best way to get better at something is to do it a lot. You need to practice!

It’s easy for life to get in the way and for sexual and emotional quality time with your partner to go out of the window, especially once you’ve been together for a while or you’ve moved in together.

But the less you do it, the less chance there is that you’ll grow together sexually and start having satisfying sex that will underpin your strong emotional bond.

Sex should be fun and is a wonderful way to bring you closer to your partner, so make it a priority. If you have to schedule it because of work or other commitments, do it. Scheduled sex doesn’t have to mean boring, unfulfilling sex.

Still not sure what to do about your boyfriend’s lacking bedroom performances? Chat online to a relationship expert from Relationship Hero who can help you figure things out. Simply click here to chat.

This page contains affiliate links. I receive a commission if you choose to purchase anything after clicking on them.

Katie is a writer and translator with a focus on travel, self-care and sustainability. She's based between a cave house in Granada, Spain, and the coast of beautiful Cornwall, England. She spends her free time hiking, exploring, eating vegan tapas and volunteering for a local dog shelter.